Danish House student committee voices out
J-on | Sunday, June 17, 2012 |
By: Ashwin Kumar
Photos By: Vinesh Rao
Kampar, 16 June – The first Danish House student committee meeting was deemed “a step forward” as a number of important issues, including safety, security, and unstable Internet speed was discussed earlier today.
The meeting was held at the Grand Kampar Hotel and was formally conducted by the official moderator, Mr. K. Ravinther. The main objective of the dialogue is to address the various problems faced by the Danish House residents. According to Ravinther, there is no point in dragging these issues for months and it is good to have student representatives as they can give feedback as both students and residents of Danish House point of view on unstable internet connection and security issues.
“The services provided by Danish House are excellent but the most recent problem is the internet connection as before this we had better internet service with the provider being Streamyx but due to some ethical issues by students upon downloading and stealing internet connection issues Danish House had to implement this Extreme Broadband internet services which is kind of slowing down the internet connection lately.”
“I have to review back what was in the agreement between Danish House and Extreme Broadband Management because it is improper to voice out dissatisfaction through social network as I know out of many Hostel Management Services, Danish House is doing pretty good job.”
Issues dealing with security service were also discussed at length.
Ravinther said that the next step would involve bringing the concerns of the students to the attention of the management.
“I will meet representatives from both Danish House and Extreme Broadband Management as I also want to hear their point of view on these issue. “, said Ravinther.
“We will then have another meeting to solve these setbacks in a fair way.”
A timeline for the next round of talks has not been set at the moment.

All ears: Mr Ravinther listening attentively to the issues of security highlighted by the student representatives

Residents raise their voice at interactive day
J-on | Wednesday, June 13, 2012 |
By LOGHUN KUMARAN
Photos by ASHWIN KUMAR
Kampar, 9 June - Danish House residents participated in a fun-filled day of dialogue as they were given the chance to express their views and concerns in an open meeting with Danish House management earlier today.
Officially called Danish House Interactive Day, the meeting was held at the Grand Kampar Hotel, and was the brainchild of engineering student Jay Chew and current UTAR Student Representative Council Chairman Dinesh Pillay.
According to Pillay, the event provided an improvement on the current platform of customer feedback used by Danish House.
“Before this, customers could only express their dissatisfaction on the feedback form provided with no further follow up on the complaint made. This caused residents to get frustrated.”
“Therefore, we thought that it would be better to have a meeting with the management on a personal level, so they know what’s happening on the ground, which is not something that happens frequently. This event acts as a platform for residents to address the problem faced directly.”
The get- together was conducted in a very informal and interactive manner with a number of team building exercises to create a friendly atmosphere before the addressing the main issues .Danish House Operations Manager Wilson Wong Wah Onn  explained that this was done to ensure discussions flowed smoothly.
Having Fun: Students and Hostel management staffs joint hands in “Pole Down Game"
“Since this is the first time that we have had a Danish House Interactive day, it is better to know each other well before discussing any issue. This relaxed setting will make it easier for people to share their thoughts and feelings” he added.
Some of the issues raised by residents involved safety, security, and unstable Internet speed. In response to this, a five person committee was appointed to represent the students’ voice.

The committee would act as liaison between Danish House management, Extreme Broadband, as Danish House’s current Internet supplier, and the residents.
Danish House resident Lee Gwan Yew said that he was excited to be a part of this effort.
“Before this, all we could do was complain on Facebook or fill up a form. Now at least we can meet them face to face to explain the issues concerning.”
Danish House management said that this meeting would be the first of many, which would henceforth be held twice a year.  The committee will meet with representatives from the management at a later date to discuss solutions for the issues raised.
Posted by m@danishhouse at 12:21 AM 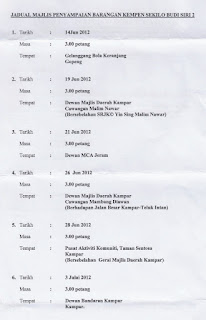 Posted by m@danishhouse at 7:55 PM

COLLECTION OF LEFT BEHIND ITEMS 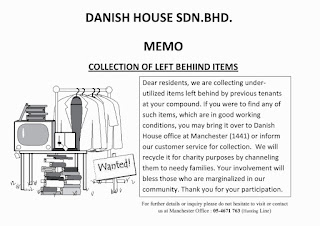 Posted by m@danishhouse at 2:51 AM 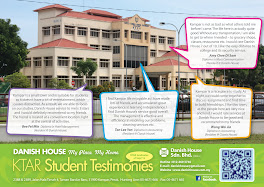